Another Year, Another Round of Agricultural Bailouts

Why do they need aid?

President Trump’s tariff policy imposes tariffs on metals for Europe, Japan, Canada, and Mexico as well as a 25% tariff on all Chinese imports. These countries retaliated with tariffs mostly on US agricultural exports. Since China buys one-third of American soybeans), soybean farmers across the US have seen massive losses in the past two years. With no end to the trade war in sight and grain storage full, the government has stepped in for the second year in a row to help prop up farms.

Since the US farms modernized post-WWII, they’ve relied heavily on exporting their surplus crops abroad. In 2018, US Agricultural exports totaled $140 billion. In addition to exporting the majority of harvests, most farms only grow soybeans or corn. With so much farmland committed to these products, it is difficult to find new buyers for the products.

In the first few months of the tariffs in 2018, the price per bushel of soybeans dropped 20%. As the price continues to drop two years later, farmers struggle to make any money on their soybean crops.

Where do farmers stand on tariffs?

While the aid program is massive, farmers have dealt with a $3 per bushel price drop, but the most paid out by the program is $1.65 per bushel. There are also many agricultural industries not supported by the bailout equitably, including the beef, dairy, and fishing industries.

While farmers are grateful for the bailout, they recognize that the bailout is a temporary fix for a long-term issue. Losing relationships with foreign buyers and replacing sales with aid hurts the US agricultural economy long-term. Foreign buyers now turn to other nations, such as Brazil, to purchase agricultural products. With no knowledge of how long the tariffs will be in place, farmers can’t predict next year’s income. Since farmers plan what the will plant a year out, they struggle to make decisions on how much and what to plant. One farmer in Virginia decided to plant hemp for the first time this year in the hopes that it would provide a higher margin than soybeans. 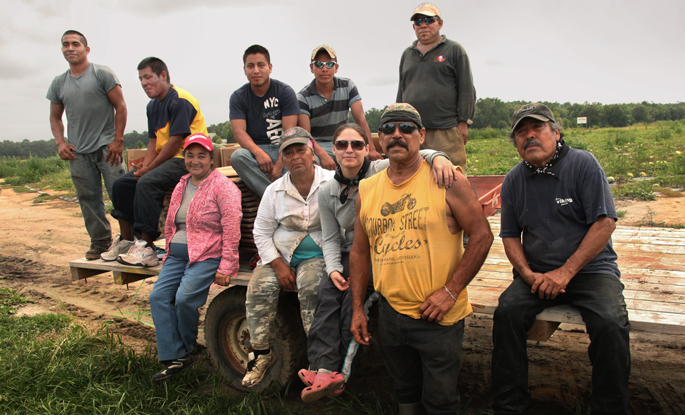 Polls show farmers’ pessimism on the impacts of the trade war on their exports. While these polls have led President Trump to take a step back in Mexico and Canada, the loss of China as a major buyer hurts the economy. While many US farmers complain about the policy, some find it justified. GOP Sen. Chuck Grassley of Iowa, a farmer, said we “can’t let the Chinese screw us on international trade where we have $600 billion deficit.”

How is the aid given, and where does it come from?

The government provided aid in 2018 and 2019 to farmers via a Depression-era program called the Commodity Credit Corporation (CCC). Allocating money through this program does not require Congressional approval, so while the decision had political backlash, Congress cannot step in to change the decision. The money reaches the agricultural sector through three programs. First, the Market Facilitation Program, $14.5 billion in 2019, pays producers directly. Second, the Food Purchase and Distribution Program, $1.4 billion in 2019, buys surplus crops, and gives them to food banks, schools, and other programs for the poor. Third, the Trade Promotion Program, $100 million in 2019, goes toward developing new markets to export crops.

How does this aid fit into the US Agricultural system?

Agricultural subsidies have existed in the US to stabilize farmers’ incomes since WWII. While President Thomas Jefferson’s yeoman farmer created the first image of the American farmer, farming looks very different now. The industry now depends on two to three main cash crops, chemical pesticides, expensive machinery, annual federal subsidies, and immense international exports. In this global economy, the US increasingly exports and imports agricultural products. While President Trump would like the US to move towards a more insular system, the US no longer produces the variety or quantity of food that it consumes. 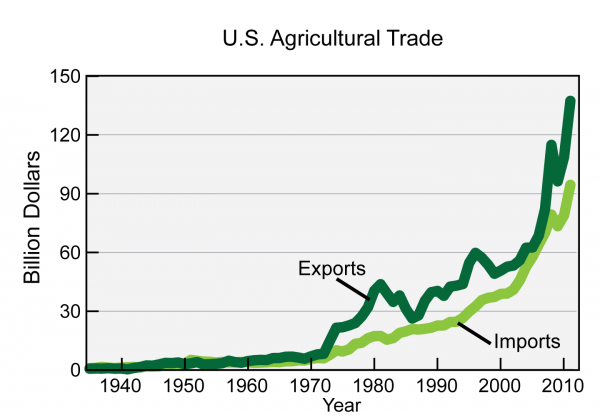 In 2005, the US gave $23 billion to farmers. The current bailout comes in addition to the year’s subsidies. With a system so reliant on subsidies and few bulk buyers, a disruption like the trade war could ruin the long-term position of US farmers in the world economy.